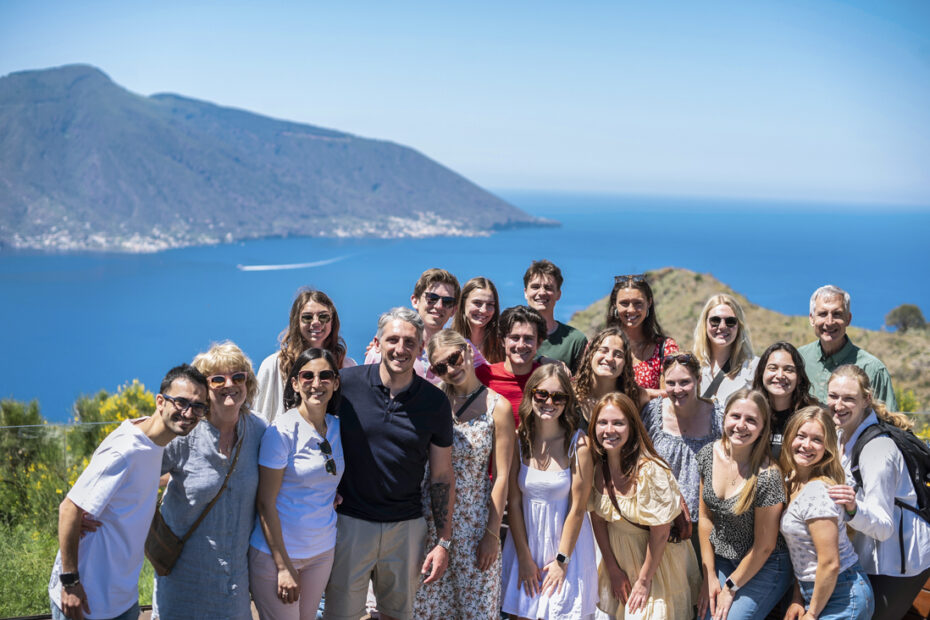 Johann Wolfgang von Goethe, in his Travels in Italy, wrote: ‘If we stand at the highest point occupied by the ancient spectators (of the Greek Theatre), we must recognize that never, probably, has a theatre audience seen anything like it. On the right side are castles on the cliffs above; farther on, below us, lies the city, and although its houses are of recent date, they certainly occupy the same places where others stood in ancient times. In front of us the whole, long, mountainous massif of Mount Etna; on the left the shore of the sea as far as Catania, or rather Syracuse; and the very wide picture is closed by the colossal smoking volcano, which in the sweetness of the sky appears more distant and tamer, and does not inspire terror.
If Goethe’s description was still not enough, here are 10 good reasons to study Italian in Taormina 🙂

1 – BECAUSE IT IS IN SICILY

Yes, we confess it: we are in Sicily, on this island that is a catalyst and summa of Mediterranean cultures and civilizations. Do you know how many UNESCO sites there are in Sicily? As many as 11, between tangible and intangible heritage. Studying Italian in Taormina, will give you the chance to enjoy them all, from Syracuse and the Necropolis of Pantalica to the Valley of the Temples in Agrigento, from the Baroque cities of the Val di Noto to the Villa Romana del Casale, from the volcano Etna to the Aeolian Islands, from the Arab-Norman route in Palermo, Monreale and Cefalù to the Opera dei Pupi (puppet opera), from the alberello cultivations of the vineyards to the gentle and sunny countryside of the dry stone walls, and, finally, to the famous Mediterranean Diet with all the genuine products of the organic cultivations of this wonderful island! Said the great Gesualdo Bufalino: “…the Sicilies are many, I will never finish counting them…”. And it is true! Start discovering them, one by one. Our Italian language school in Sicily will help you unveil them slowly….

2 – BECAUSE TAORMINA IS TAORMINA!

Taormina the beautiful, Taormina the sweet, Taormina the pearl….
How many adjectives are wasted on this town resting on the Rock of Mount Tauro overlooking the sea and one of the most striking corners of Italy: Isola Bella.
Taormina–the coveted destination of writers, painters, Grand Tour artists, and half the aristocracy of 19th-century Europe. Few know it, but there was, as early as the late 1800s, a stable rail link between Berlin and Taormina.
Taormina… where villas and residences of various English, German, French, and Dutch nobles and notables were born, from Tsar Nicholas I to Kaiser Wilhelm II of Germany, from Tsar Nicholas II to Tsarina Aleksandra Fyodorovna Romanova granddaughter of Queen Victoria and Queen Beatrix of Holland.
Taormina… where actors and actresses of international caliber, from Elizabeth Taylor to Marlene Dietrich, from Sophia Loren to Cary Grant, from Marlon Brando to Charlton Heston, from Audrey Hepburn to Gregory Peck, from Tom Cruise to Melanie Griffith, Antonio Banderas, Robert De Niro, Michael Douglas, Nicole Kidman, and countless others, young and old strolled and strolled on the Corso Umberto, stayed at the San Domenico, looked out at the Timeo, enchanted by the beauty of this town and its views.
Taormina… home and refuge for famous writers and artists: Goethe, Maupassant, Houel, von Gloeden, Otto Geleng, Nietzsche who wrote Così parlò Zarathustra here, Strauss, Wagner, D’Annunzio, Gustav Klimt, Freud, De Amicis, Peyrefitte, Capote, Gide, D.H. Lawrence, Quasimodo, Tennessee Williams and many, many more…
Taormina… where people flock for a concert, a ballet, an opera at the Greek Theater, or an international social event.
Taormina… set for countless movies and commercials.
Taormina… a name the whole world loves!

3 – BECAUSE YOU CAN COMBINE STUDY AND VACATION

Enrolling in an Italian course in Taormina, Sicily, will allow you to fulfill your dream of learning Italian, and to do it in a relaxed atmosphere where you can enjoy moments of leisure and fun. Do you want to know what a typical day is like for one of our students or students? Here it is: arriving at school and, before the class starts, enjoying a good coffee or a nice hot cappuccino in the shade of our Mediterranean garden. Go to class for the Italian lesson and, at the end of class, have lunch with the other students at the restaurant in the school garden. Here, decide what to do in the afternoon with the other students. Going to the beach? Taking a boat ride and maybe doing some snorkeling and diving? Or engage in culture and go visit one of the many archaeological sites, historic towns, or quaint villages on our island? Or perhaps, devote yourself to nature with some walks in the woods of Mount Etna or some other nature reserve nearby? Oh yes, the choice is tough! And in the evening, after returning home, decide whether to cook yourself something to put into practice the thousands of Sicilian recipes or continue to pamper yourself by lingering in one of Taormina’s many restaurants. And after dinner, linger for a last drink with friends in one of the town’s bars or take advantage of a concert, movie, or ballet at Taormina’s Greek Theater while enjoying the show and the wonderful view of Naxos Bay and Mount Etna in the background. For the more daring, then, there is no shortage of nightclubs where you can make morning…

4 – BECAUSE IT IS A CITY ON A HUMAN SCALE

Yes, of course, Taormina is a city with a strong focus on tourism. Everything here is aimed at enjoying life! The right place to unplug from the stress of work, big city, professional, or study worries. In the city, you get around on foot, with no need to use transportation. In just a twenty-minute walk, you can go from one part of town to another. The historic center is connected to the beach, Mazzaro Bay, and Isola Bella by cable car. A one-minute ride for the lazy. The more athletic, on the other hand, can take advantage of it by walking. Here, the locals have not lost the taste to chat, to get to know the new visitor in town and, in particular, our students who, in a few days, will be immediately “at home” in Taormina!

5 – BECAUSE OF THE CULTURAL OFFERINGS

Taormina is not just a holiday, good food, and entertainment. Taormina is also culture. And not only for the archaeological and architectural evidence it offers, from the Greek Theater to the Roman Odeon, from the Naumachie to the Arab-Norman Palaces, but also for the various proposals that populate the calendar of artistic and cultural events throughout the year. The most famous is certainly Taormina Arte, a billboard that hosts the very famous Taormina Film Festival, as well as numerous live concerts from classical music to symphonic music, from opera to pop and rock concerts. On the stage of the Greek Theater then the best dancers in the world perform their shows in which they put on fabulous ballets with, behind them, the silhouette of the ancient theater. If you are lucky, then, during a performance at the Greek Theater, you may even happen to witness the spectacle of an eruption of Mount Etna in the distance!
Another event of great interest is Taobuk, or the Taormina Literary Festival, which every year hosts the greatest writers of the national and international scene. An unmissable opportunity for those studying Italian in Taormina.
But the city teems with small concerts in the lobbies of prestigious hotels, as well as in pubs and à la page haunts. And there is no shortage of art exhibitions – painting, photography, and sculpture – and cultural gatherings of various kinds, from literature to civil society.
In short, Taormina, besides being an open-air museum, is a place where art finds form and fulfillment in all its forms.

6 – BECAUSE OF ITS NIGHTLIFE

Well, what can we say?! Taormina has become Taormina because of the many clubs, pubs, bars, and cafes where the voices of the most diverse and colorful humanity echo, where the accents of the world mingle and shipwreck in the local dialect, where avant-garde and provocation have been the masters for years, where transgression and worldliness have always walked hand in hand among the streets and alleys of Taormina. People come to Taormina from all over the world to have fun, to meet, and to get to know each other!

7 – BECAUSE OF ITS GASTRONOMY

Do we want to talk about the goodness and variety of Sicilian cuisine that, in Taormina, is offered by dozens of restaurants, including many Michelin…?!? All the basic ingredients for good food are found in Sicily, from vegetables (eggplants, zucchini, peppers) to greens, from fruits (oranges, tangerines, figs, peaches, apricots, loquats) to grapes (from which the finest white, black and dessert wines are produced), from sea fish to meats from local farmers. Everything is grown and raised to delight the most demanding and uncompromising palates! And Sicilian cuisine repurposes scents and essences of recipes that come from all shores of the Mediterranean, repurposing them with that unique touch in the kitchen that only Sicily can provide. As we always say, “you also travel with your belly,” and in Sicily and Taormina you can certainly have unforgettable food and wine trips!

8 – BECAUSE OF BABILONIA, BECAUSE AT THE CENTER OF OUR LESSONS IS YOU!

We talked a lot about Taormina and Sicily but then there’s us, BABILONIA – Italian language school in Taormina, Sicily! Did you know that our Italian school for foreigners was the first Italian school in the South of Italy? How could foreign lovers of the Italian language and culture be deprived of the possibility of a study stay in Southern Italy? How to deprive students of Italian of the opportunity to learn about the enormous cultural heritage and beautiful landscapes of the South and Sicily in particular? In 1992, we were born for this: to offer you a quality Italian course and, meantime, introduce you to our history, our culture, our traditions. We are sure that you too will be fascinated.

It has always been clear to us that studying a foreign language is not about making a collection of grammar rules. A language is more, much more! Sure, accuracy, and correctness, are important, but even more so is fluency, even with a few mistakes, who cares! For us, communication is at the center of everything. At our school, we work hard to ensure that your overall comprehension of oral and written texts improves throughout your stay-study. The student is not a basket to be filled with theoretical notions but is at the center of the lesson, and they probably chose to do a study stay in Italy to improve communication skills and not to passively collect grammar rules!

A language stay in Italy can really change the way you interpret the world. You know, knowing and speaking one or more foreign languages help you observe the world from different perspectives. Learning Italian, then, can help you to be more flexible, less exaggeratedly rigorous, more communicative and empathetic, to use more cheerfulness and irony in human relations, and to take life more philosophically because, at the end of the day, “you work to live and you don’t live to work.” And, in Taormina, this is sacred dogma!